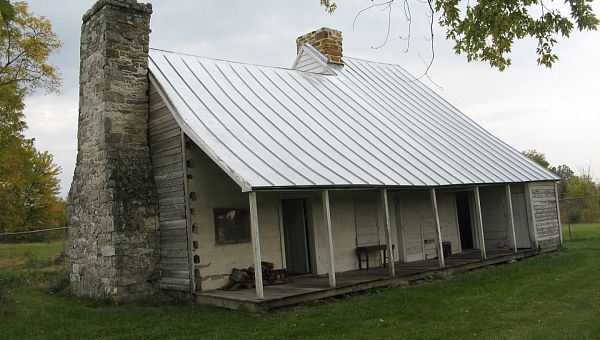 When the timbers were being hewn, George the Second was King of England. George Washington had recently purchased his first tract of land nearby. Charles Town did not yet exist, and Mecklenburg and Harpers Ferry were fledgling villages clinging to the banks of the Potomac. It was in the late 1740’s when Peter Burr I, future uncle of the notorious Aaron Burr, arrived from Fairfield, Connecticut.

The Peter Burr House is one of West Virginia’s most important historic treasures. Its story spans the period from early settlement, through the birth of our nation and the tragedy of the Civil War, to well into the 20th century.

Although it has been listed in the National Register of Historic Places since 1981, the Peter Burr House was almost lost when it passed out of the hands of the Burr family and into those of local government. Deterioration and vandalism took their toll. Then it was acquired by the Jefferson County Historic Landmarks, who began restoring it in 1998.

The house has many stories to tell, so while the restoration is under way, we are bringing it and the grounds to life by creating The Peter Burr Living History Farm. The Farm, an 9.5 acre complex, is a work in progress which will show you what it was like to live here in the 1790’s, when Peter Burr was still alive.

The Farm’s reproduction of a mid-18th century barn is complete. Public restrooms were built and work is underway to provide other needed public services. Interpretative and educational programs are being planned for you and your family.

We could use your help to preserve the Peter Burr House so that you and future visitors can experience this living piece of history.

Why are Peter Burr and His House Important?

From the early days of settlement, the area now known as Jefferson County has represented a clash of Northern and Southern values and cultures. Unlike many other local properties of the period, the Peter Burr site is not a plantation but rather the home of a yeoman farmer. As such, it is an extremely rare survival and important example of a way of life that was overshadowed locally by Tidewater culture.

Peter Burr II, the son of the man who built the house, lived there until he died in 1795. He was the cousin of Aaron Burr, whose goals and views were frequently at odds with those of George Washington and his supporters. During the American Revolution, Aaron Burr supported Generals Charles Lee and Horatio Gates in their efforts to depose George Washington. (Both generals settled in Jefferson County after being dismissed by George Washington. Gates’ home, Travellers Rest, is located near the Peter Burr farm.) Peter Burr’s associations with his cousin and with George Washington’s cashiered generals further suggest that he did not share the values of the Washington family members who had settled in the area.

Interpretation of the Peter Burr Farm will provide a valuable perspective on the origins of Jefferson County and on the themes that would later produce the state of West Virginia. The Peter Burr Living History Farm seeks to restore the site to its late-18th century condition and to use it as a place for heritage education. Activities will include planting, cultivating, and harvesting period and native species as well as other domestic activities.

Work will be performed by persons in period dress and social, cultural, economic, and political themes will also be presented. Comparisons with nearby plantations will be explored. Program emphasis will focus on youth education through the active participation of volunteers and guests in farm activities.